We’ve all heard it and probably parroted these thinking they were true:

Okay, I haven’t heard the last one too much, but some people think everything changes when doing calories because when you stop pulling you don’t get any more calories. Sure, when you stop rowing, the monitor slowly continues to add meters. But the same thing is happening when you stop rowing for calories, you just might not see it. If calories were shown out to 1/10th or other fractions, then you could see that you’re slowly chipping away at each calorie. Imagine the opposite: if you were rowing for meters but the erg monitor only updated every 50m. You’re still moving along, the monitor just doesn’t give you precise updates.

Remember 15.5? Rowing for calories and thrusters? For CrossFit Open WOD 15.5, there was a rule that said “Each time you return to the rower you or your judge must reset the monitor to zero before rowing.”

Because the monitor is still chipping away on the next calorie when you stop! Have you ever noticed that if you keep the monitor going during sets, that your first calorie back on the rower comes a LOT quicker? It’s true!

So how are calories calculated on the erg? Well the monitor is calculating calories per hour, which is related to power output, which the erg measures in watts.

If you want to read about the physics of erging, then click HERE to find out more than you ever wanted to know!

So How Are Calories Counted?

As I just mentioned, the erg calculates calories based on power output (watts). So how do we figure this out? First, to figure out watts, we use the following formula provided from Concept 2: 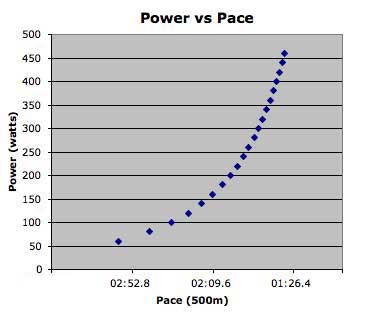 Calories and Watts have a pseudo-linear relationship.

The ‘Calorie’ output on a Concept 2 ergometer is an approximate guide to calories burned rather than mechanical work performed. Mechanical work is defined as the average Power x time:[/cs_text][x_blockquote cite=”” type=”center”]W = P * t[/x_blockquote][cs_text]If Power P is measured in Watts and time t in seconds, then the Work W is obtained in Joules. So, rowing a steady 200W for 30 minutes (1800 seconds), you would generate an amount of mechanical work:[/cs_text][x_blockquote cite=”” type=”left”]W = 200 x 1800 = 360 000 J = 360 kJ[/x_blockquote][cs_text]In physics, a ‘calorie’ is defined as the amount of heat energy required to raise the temperature of 1 gramme of water by 1 degree centigrade, giving 1 calorie = 4.2 Joules. Dieticians, on the other hand, use the term ‘calories’ differently – their ‘calories’ are 1000 times bigger (‘kilo-calories’, kC), so dividing 360 kJ by 4.2 gives the mechanical work done in terms of ‘dietary calories’: 85.6 kC

However, for the above workout you would actually get a displayed value approaching 500 kC, i.e. a factor 5 – 6 times larger. This is because the computer attempts to calculate the number of calories you burn up (effectively chemical energy contained in fats and carbohydrates) in order to generate the mechanical work. It uses the formula[/cs_text][x_blockquote cite=”” type=”left”]E = ( 4 W + 0.35 t ) / 4.2 [kC][/x_blockquote][cs_text]where E is the displayed number of calories [kC], W is the mechanical work in kJ, calculated according to the first equation (W=P*t), t is the time in seconds. This assumes that the body actually requires 4 units of chemical energy to generate 1 unit of mechanical energy (i.e. 25% efficiency) plus a background consumption of 0.35 kJ/sec (=300 kC/hour).

Not a whole lot. Basically, the faster you go, the more calories you burn.

But did you see anything in the equation about the damper setting on the erg? Or your stroke rate? Nope!

What changes on the erg when you press the units button on the monitor? Nothing! The laws of physics are the same, nothing has moved around on the erg. What once said meters now says calories. Everything is still the same…So why change how you row?

Regardless of rowing for calories or meters, you need to row the same way and remain efficient.

Think of it this way: If you’re running 1600m or running 1 mile, are you going to do anything different? No. It’s the exact same thing, just measured differently. Same thing when you’re snatching with pounds vs kilogram plates. Nothing has changed except for the unit of measurement.

SO WHAT CAN I DO TO IMPROVE MY CALORIE ROWING?

For starters I took the guess work out figuring out how calories/hour compared to split times with the chart below!

So let’s say a WOD involves 50 calorie row at the beginning and end of the workout. Looking at my chart, that’s going to end up being longer than 500m unless you can row a sub-1:30 pace for 500m and still have energy left in the tank. For 50 calories it’s going to take around 600-900m in the end, so you definitely DO NOT want to row as fast as your 500m PR pace. Maybe for this workout you’ll aim for your 2K pace. If your 2K time is 8:00, that’s a 2:00/500m pace which equates to ~1000 cal/hr on the monitor. You’ll finish 50 calories in roughly 3 minutes and you’ll have traveled about 750m. Nothing too crazy so you should have plenty of energy left to complete the workout and the final row at the end!

Again, don’t change the way you row just because you changed what the monitor says.. Going into any workout on the erg requires that you understand how to use it. There is no good way to game the machine that can outperform good movement patterns and efficiency. Taking the time to learn the skill will improve not just your calorie rowing but any of your rowing workouts.[/cs_text][/cs_column][/cs_row][/cs_section][/cs_content]